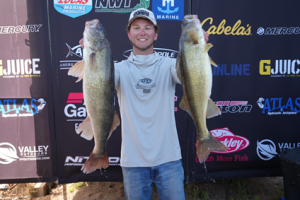 This year Bannick LLC sponsored Eric McQuoid during his rookie year in the National Walleye Tour which held their season Championship on Ottertail Lake in Minnesota on September 22-24, 2021.

The McQuoid family is well known in tournament walleye circles as Kevin, his father, has been a successful pro angler for more than 30 years. His mother, Karen McQuoid, and Bannick CEO, has held her own as a team partner of Kevin’s on the MWC. This year it has been their 21-year-old son, Eric McQuoid’s time to shine.

Eric sat in fourth place after day one of the tournament with 15.62 lbs. Day two was HUGE and he shocked the west-central Minnesota crowd with a 23.72 lb. stringer and carried over a 7-pound lead heading into the final day of the 2021 National Walleye Tour Championship, presented by Bass Pro Shops and Cabela’s.

Day 3 did not disappoint those of us that know him well and were cheering him on from near and far. His team brought in an impressive 19.21 lbs. for a three day total of 58.55 lbs. Eric’s fishing knowledge, skill and determination clinched the championship winning by a landslide 13.67 lbs. ahead of the second place angler.

Getting to know Eric:

Congratulations Eric, Bannick LLC couldn’t be more proud of you!
It’s been an honor to watch you grow as a pro angler throughout your first pro season and we look forward to seeing what you accomplish in the years to come.

If you decline, your information won’t be tracked when you visit this website. A single cookie will be used in your browser to remember your preference not to be tracked.